This is a DRY FLY whatever the looks. It has been extremely effective during its 10 year span. Usually, if this fly is Your first choice You seldom have to replace it. Not for finicky traditionalists but a fly for those who want to catch fish. 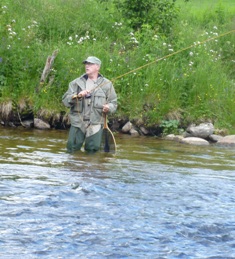 http://www.splitcane.se/plugins/system/jcemeMe and some buddies sat in a Norwegian lodge in the Valdres region. The fish took caddis pupae but we were too arrogant to succumb to the then new “Super-puppan”. We wanted something better and from our own minds. It was dubbed the “Suparpuppa” by some reason, not only because of the derivation from it´s wet ”ancestor”, the “Engan Special”,developed some thirty years earlier while fishing big river for grayling.

As it happened the “Suparpuppa” showed great qualities and quickly became my favorite “general fly”. I rarely use any other dries anymore
Nowadays, the fly is known for many and it is generally called "Anderbergaren" or, like myself prefer to call it, "The AnderBurger." It's still a juicy tidbit.. 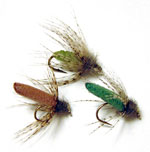